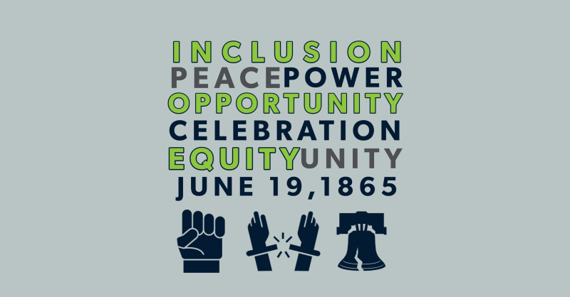 Juneteenth - short for “June Nineteenth” commemorates the effective end of slavery in the United States and has been celebrated since the 1800s. While Juneteenth (also known as Freedom Day, Emancipation Day, Liberation Day, or Jubilee Day) has been celebrated for over 150 years, it has gained more national attention over the last few years due to the racial unrest from systemic racism and protests over police brutality deaths to many Black Americans. In fact, yesterday a bipartisan bill passed Senate unanimously to make Juneteenth a national holiday! The bill is onto the House of Representatives, and if passed, will become a law. In celebration, we’re sharing some quick facts and resources about what Juneteenth is, and how to celebrate!

What happened on Juneteenth?

On this day in 1865, Union General Gordan Granger arrived in Galveston, Texas with the news that the war had ended and that the enslaved were now free. General Granger’s first orders upon arrival were to read to the people of Texas, General Order Number 3, which began with this now-famous significant statement:

"The people of Texas are informed that, in accordance with a proclamation from the Executive of the United States, all slaves are free. This involves an absolute equality of personal rights and rights of property between former masters and slaves, and the connection heretofore existing between them becomes that between employer and hired labor."

It took over two years for news of the Emancipation Proclamation to reach the enslaved people of Texas.

Yes, this is hard to imagine in  2021, a time when information travels so fast. It was nearly two and half years after President Lincoln's Emancipation Proclamation on January 1, 1863, did the executive order actually reach the people of Texas.

There are many theories and speculation of why slaves didn't learn they were freed until 1865. Some popular theories and evidence suggest that the news was deliberately withheld by the enslavers to maintain their 'labor force', along with the fact that the amount of  Union troops in Texas was lacking and took time to get sufficient Union forces to Texas to help enforce the federal order - as Texas was the most remote state in the Confederacy.  A legend is often told of a messenger who was murdered on his way to Texas with the news of freedom.

How do you celebrate Juneteenth?

Juneteenth has typically been celebrated as Black American Independence day, and has been celebrated as such with barbeques, picnics, parades, and festivals or events. The freedom of all Americans is something that needs to and should be celebrated! This holiday is about bringing people together and celebrating Black history, life, and culture.

Not sure how to celebrate? Here are some ideas to get you started:

How to create a social media guide for a successful campaign

1 in 5 Americans has a disability, and through social media, employers can tap into their current...

How can we support Developmental Disabilities Awareness Month?

5 Ways to Celebrate the 30th anniversary of the ADA

July 26th marks the official 30th anniversary of the Americans with Disabilities Act, the civil...